The introduction of text ads can require a huge workforce when setting up new Google Ads accounts or creating new campaigns. At ZEO, we are trying to make this process easier with the assistance of Google Ads Scripts. We wanted to share the script we prepared for this purpose with everyone.

The script we share will be following these steps:

You need to copy the following Google Sheets file to your own Google Drive media with the "Make a Copy" option. http://zeo.agency/google-sheets-toplu-reklam-sablonu The document has a look as shown below.

The area between A and K sütunları arası script’imizin kullanacağı bilgileri içeriyor olacak. Bu nedenle bu aralıktaki sütunlardan herhangi birisi silinmemeli, yerleri değiştirilmemeli. L to R columns control character limits in ad slots. If the character limit is exceeded, the corresponding cell is displayed in red text color. Areas within limits are shown in green. S column shows the total number of character limit violations. You can delete or change columns between L and S. It will not affect the execution of the script. The reason these columns exist is to facilitate text writing.

When creating our ads in the Google Sheets file, we must follow these rules:

Step 3. Copying and Editing the Script

You can access the script from the following link. http://zeo.agency/script-toplu-reklam-olusturucu After copying the script, we need to create a new script file in the Google Ads interface by following Tools > Bulk Actions > Script Editor and paste it into this file.

After that, we need to make a few adjustments to make the script work correctly. First, we need to enter the link to the source file and the name of the page that hosts our ads. We use the following variables for this information:

If we want to run the script under the MCC-My Client Center- account, we need to edit the following variables.

After completing these steps you can make the authorization process by clicking the Authorize option on the script and save afterward.

We can use the preview mode, which simulates changes to be made before running scripts. We strongly recommend that you run the scripts in preview mode first to ensure that everything is fine to avoid any errors. When I run the preview mode through the sample file, I get a result like the following. 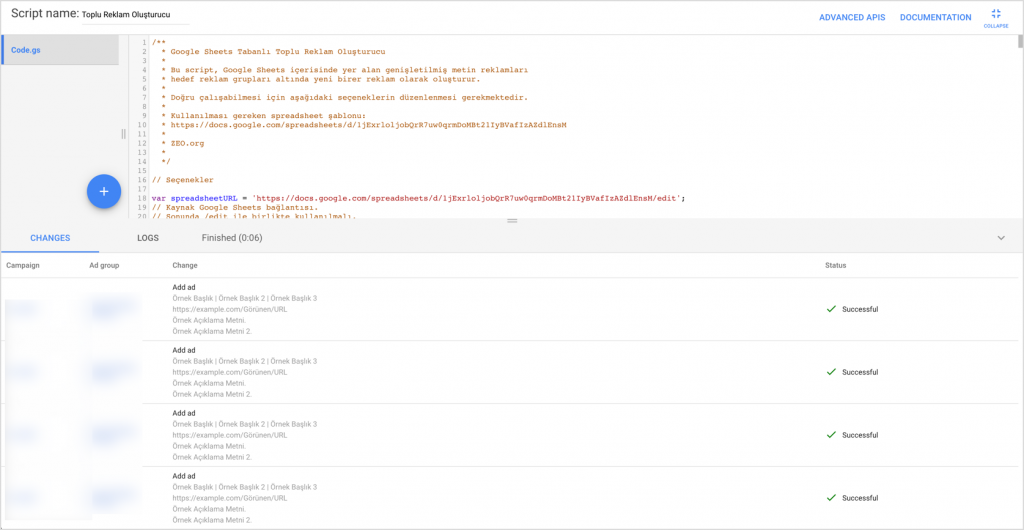 We see that the script will transfer 4 ads from the source file to the account. When I switch to the Logs tab, I see messages that some ads have been excluded because they do not meet the character limit: 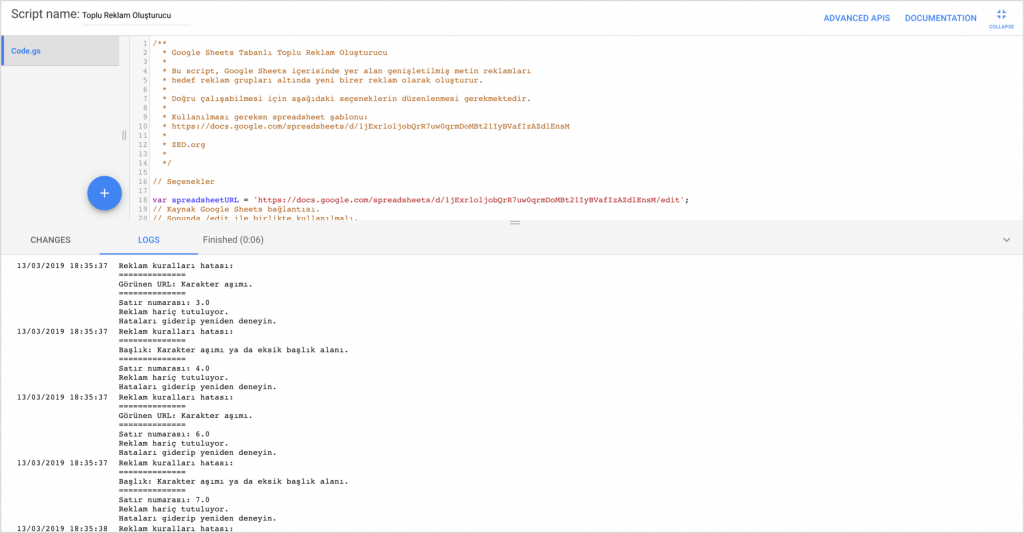 After going back to the source file and editing the ads, we can now run the script and let it make the changes to our Ads account.

If you have any questions about any problems during installation and operation, please contact us.

You can read our article about how to create a search campaign and what you should pay attention to when setting up the campaign on Zeo Blog.